Paving the Way for Hispanic Business Leaders in Indianapolis

Over the past 25 years, Tom O'Neil has played an active role in transforming the Hispanic business community in Indianapolis. OfficeWorks is proud to celebrate Hispanic Heritage Month by looking back at O'Neil's history and impact in the Hispanic Business Community. 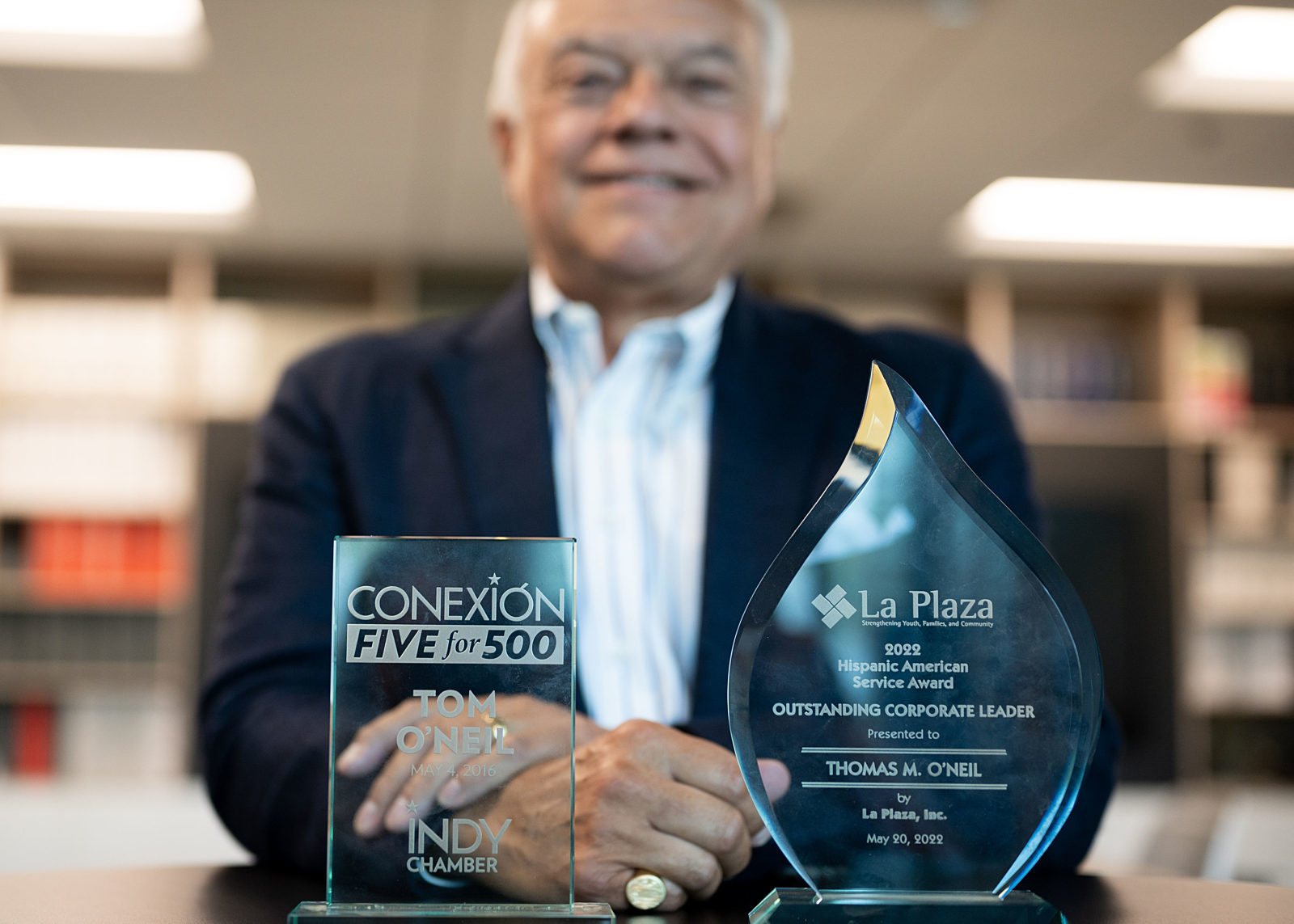 O'Neil with some of the awards he was won over the years. 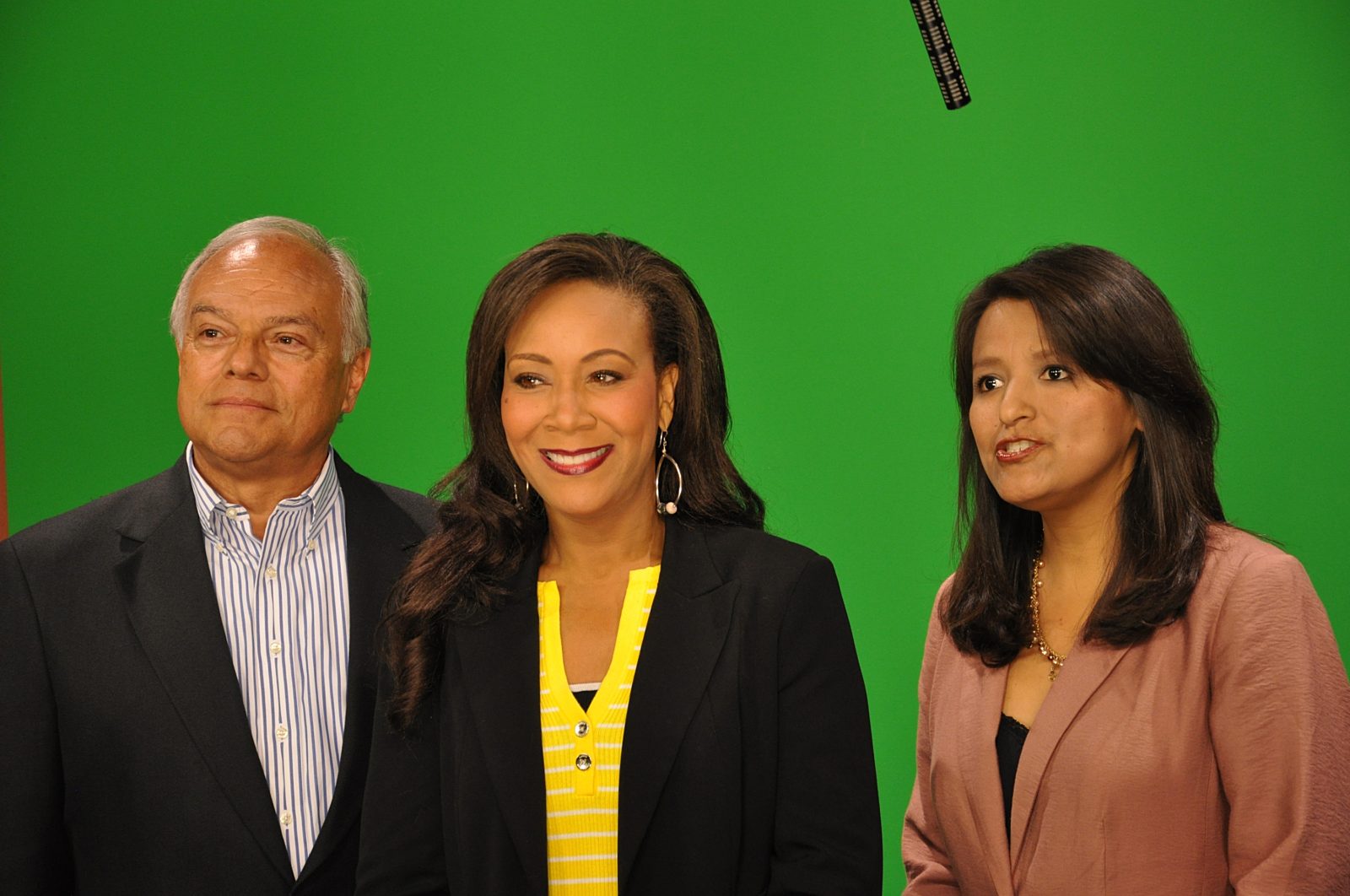 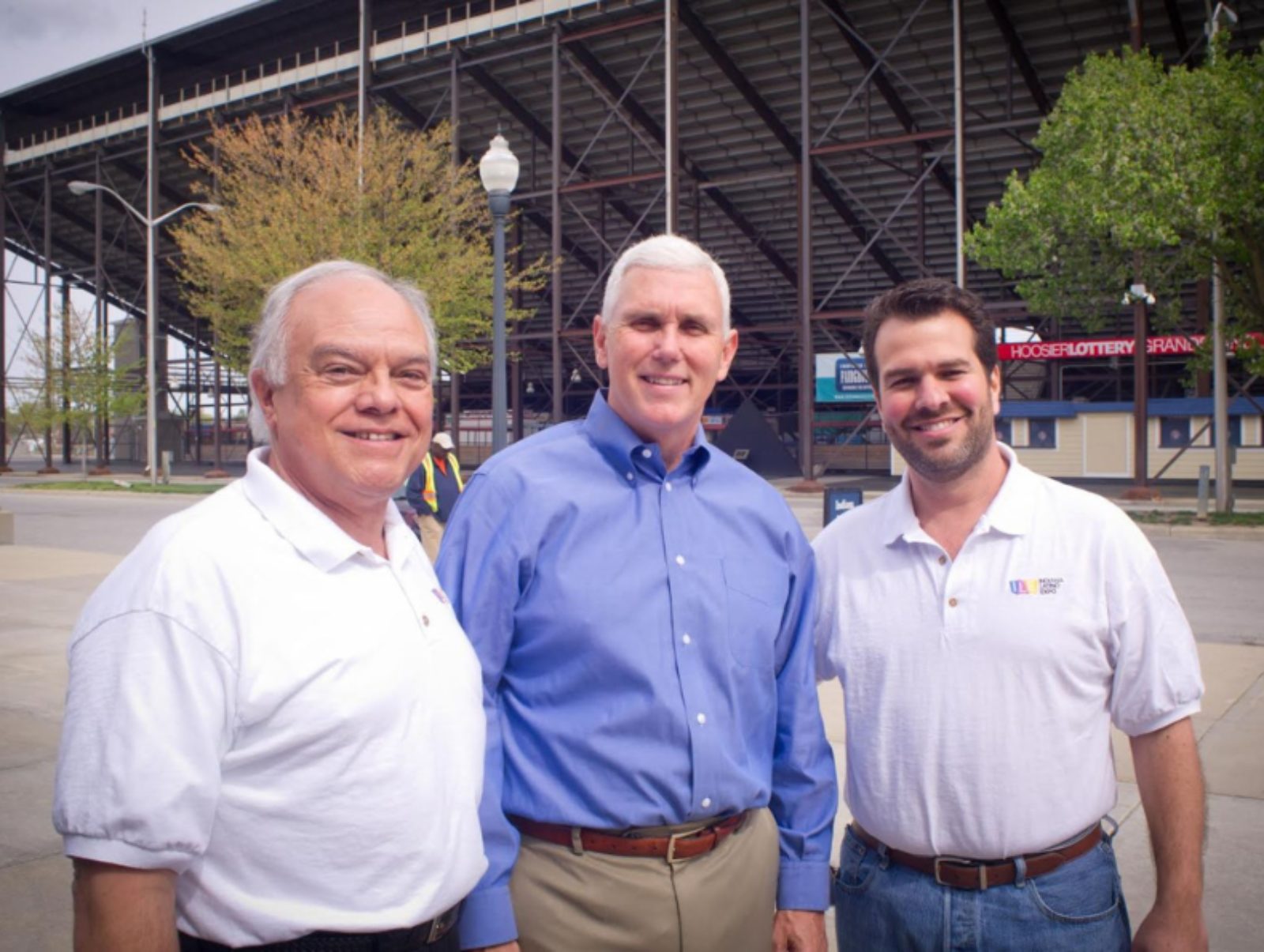 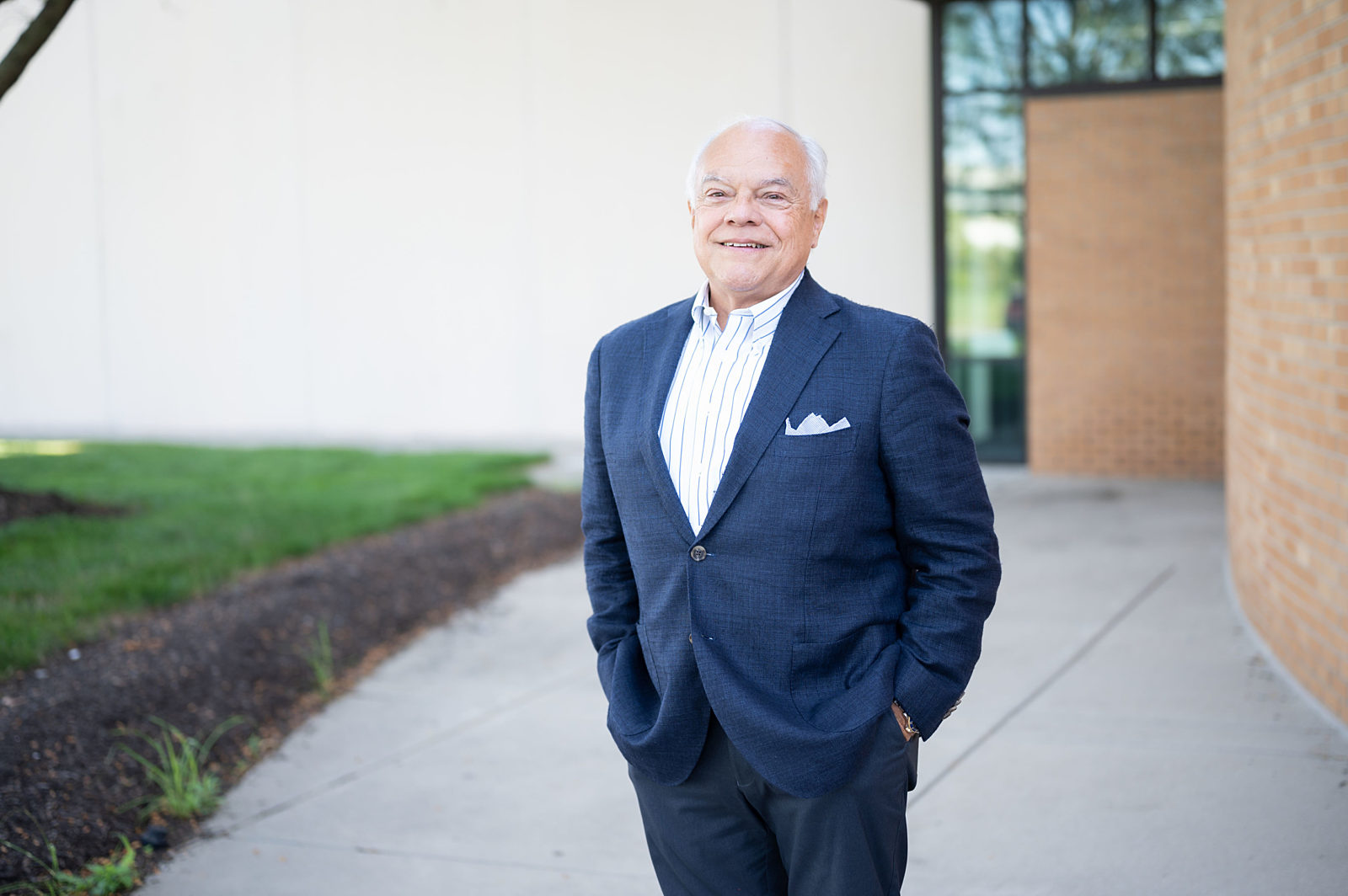 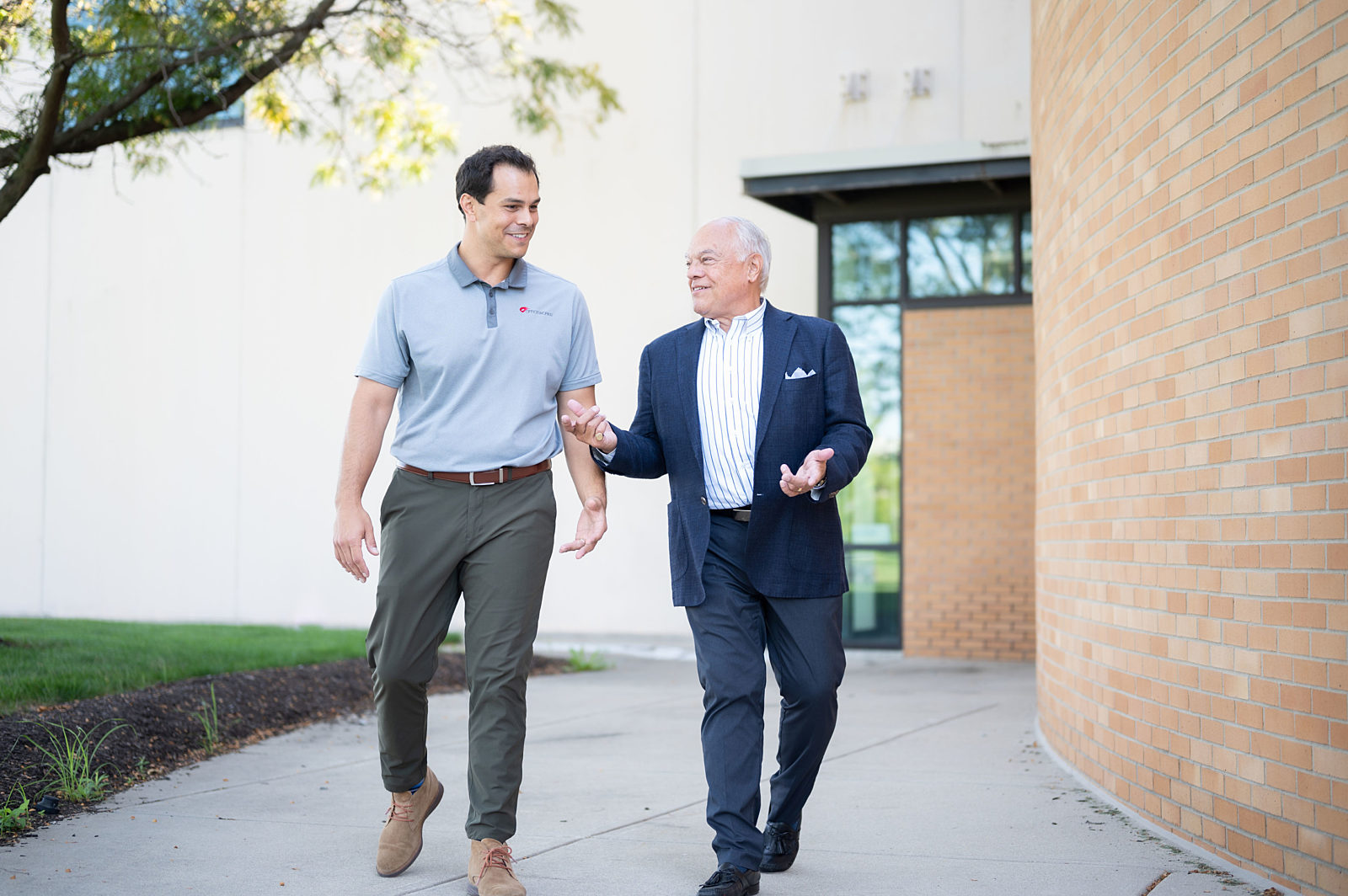 Officeworks CEO and Chairman Tom O’Neil is a trailblazer for Hispanic businesses in the Indianapolis area.

O’Neil helped spearhead the Hispanic Business Council, assisted in the development of a Scholarship Fund that has given out millions of dollars for Hispanic children, co-founded the first-ever Indianapolis Latino Expo, and was on the founding board of non-profit La Plaza, which works to strengthen the local Hispanic community.

His work has transformed the Hispanic business community through important initiatives that continue to grow and shape the region.

Mr. O’Neil is the son of a Mexican naval officer father and an Irish mother - he was born in Chicago in 1947, where he grew up for the first 18 years of his life.

By 1965, O’Neil attended DePauw University, where he is a proud graduate. He later attended IU Kelly School of Business before graduating with a Master’s in Business Administration (MBA) in 1971.

After his education, O’Neil spent time traveling to Mexico by himself to visit with his family. He says this was an eye-opening experience for him.

Following his travels after grad school, he started his professional career at Xerox, based in Indianapolis.

“I didn’t know this at the time, but I was establishing a base by solving problems in the workplace through technology at Xerox,” he says.

O’Neil continued his work with Xerox for eleven more years. By 1982, he left Xerox to work with FC Tucker Commercial Real Estate.

The first few years of OfficeWorks' existence were full of growth, but according to O’Neil, they were also rocky. The newly founded company had a lot of learning to do.

However, he says his support system kept him strong through the dark days - he looked up to his stepfather and uncle.

“They both epitomized having a great attitude,” he says. “They were both extremely grateful and gracious to other people, good communicators, and had very positive attitudes.”

By the late 1990’s, O’Neil says he started getting involved in the community. In 1997, Charlie Garcia, a construction professional and prominent member of the local Hispanic community, approached O’Neil about becoming involved with the Indianapolis Hispanic Chamber of Commerce.

The emerging Hispanic business community had prompted the creation of the Hispanic Chamber as far back as 1981. According to O’Neil, those early meetings only included about six to eight people, with no executive director at the time. This was motivating for O’Neil, and he was ready to pioneer major initiatives to support Hispanic culture in the region, eventually becoming President of the Hispanic Chamber.

By 2000, the president of the Indy Chamber, Roland Dorson, formed what he called the “diversity council.” This included the Presidents of the Black Chamber, Hispanic Chamber, and Asian-American Alliance.

“He asked us all to meet with him, and it was a great experience,” says O’Neil. ”We became very good friends, and realized that we all had the same challenges and issues to help our specific communities. The council lasted a couple of years.

O’Neil’s work has also helped shape the lives of hundreds of Hispanic students in the Indianapolis area. He sat on the advisory board that created the Mexican Scholarship Fund, which annually gives college scholarships upwards of $200,000 to deserving Hispanic students in the community. The fund was conceived by the original Mexican Consul in Indianapolis, Sergio Aguilera, and to date, has given out over $1.8 million in awards.

As founder of OfficeWorks, O’Neil says it was always his goal to give back to the community.

“As I became more involved in the community, I started to realize that it was important not to focus solely on our business - because a healthy, thriving community was actually good for all business,” he says. “I also got involved with both the Indy Chamber and Indiana State Chamber, St. Vincent Foundation, and the DePauw Alumni Board, among other organizations.”

But the work did not stop there for O’Neil.

“We started to ask what we can do to help with the businesses that were struggling,” he says. “One of the key programs of the Hispanic Business Council was a mentor protégé program, which was designed to help grow and create a sustainable path for Hispanic businesses.”

The program entailed taking Hispanic owned businesses and partnering them with existing members of the Indy Chamber.

Camacho Janitorial Supply was paired with Garcia Construction, which helped the company secure their first major contract with the Indy Airport Authority. The Morales Group, a staffing and logistics firm, was partnered with FedEx, which assisted in the development of the company. Another example is the Hispanic newspaper La Voz de Indiana - who was paired with the Indianapolis Business Journal.

O’Neil says the mentor program worked extremely well, and there are many more success stories out there.

By January of 2008, O’Neil and the HBC was part of a bigger project - a study, partnering with the Indy Chamber, and IUPUI on the economic impacts and needs of Hispanic businesses in the area.

“What we learned from the economic study was that these businesses needed recognition; and awareness of local customs, and the marketplace needed to understand they exist,” O’Neil says. “They also needed access to capital and technical assistance. It really made people more aware of the growing and emerging Hispanic business community.”

La Plaza Inc. was founded as a result of combining three small Hispanic non-profits - a social services agency, an educational focused agency, and a cultural focused agency. O’Neil was on the task force and founding Board that brought these organizations together to create a larger entity known as La Plaza.

In 2o11, O’Neil was a founding member of the Indiana Latino Expo, an event designed to help Latino families achieve their highest potential.

“We wanted to duplicate what Black Expo had done, and I would readily say we wanted it to be as successful as Black Expo,” O’Neil says.

The first expo was held in 2012, and the event continues today.

“These organizations have set the foundation for the Hispanic community in our region,” he says.

Tom’s son, Scott O’Neil, is involved in OfficeWorks as well. He will follow in his father’s footsteps by serving on the Hispanic Business Council.

“I’m proud of my father’s involvement over the past several decades in the community, and I’ve learned a lot by watching him,” Scott O’Neil says. “I’m very excited and humbled to serve the Hispanic community now and for years down the road.”