Goodman Campbell Brain and Spine’s mission includes providing comprehensive, compassionate and superior neurosurgical care in a state-of-the-art environment of healing, teaching and discovery. In support of that purpose, the healthcare provider invested in a new, freestanding building and engaged OfficeWorks to furnish their improved environment. 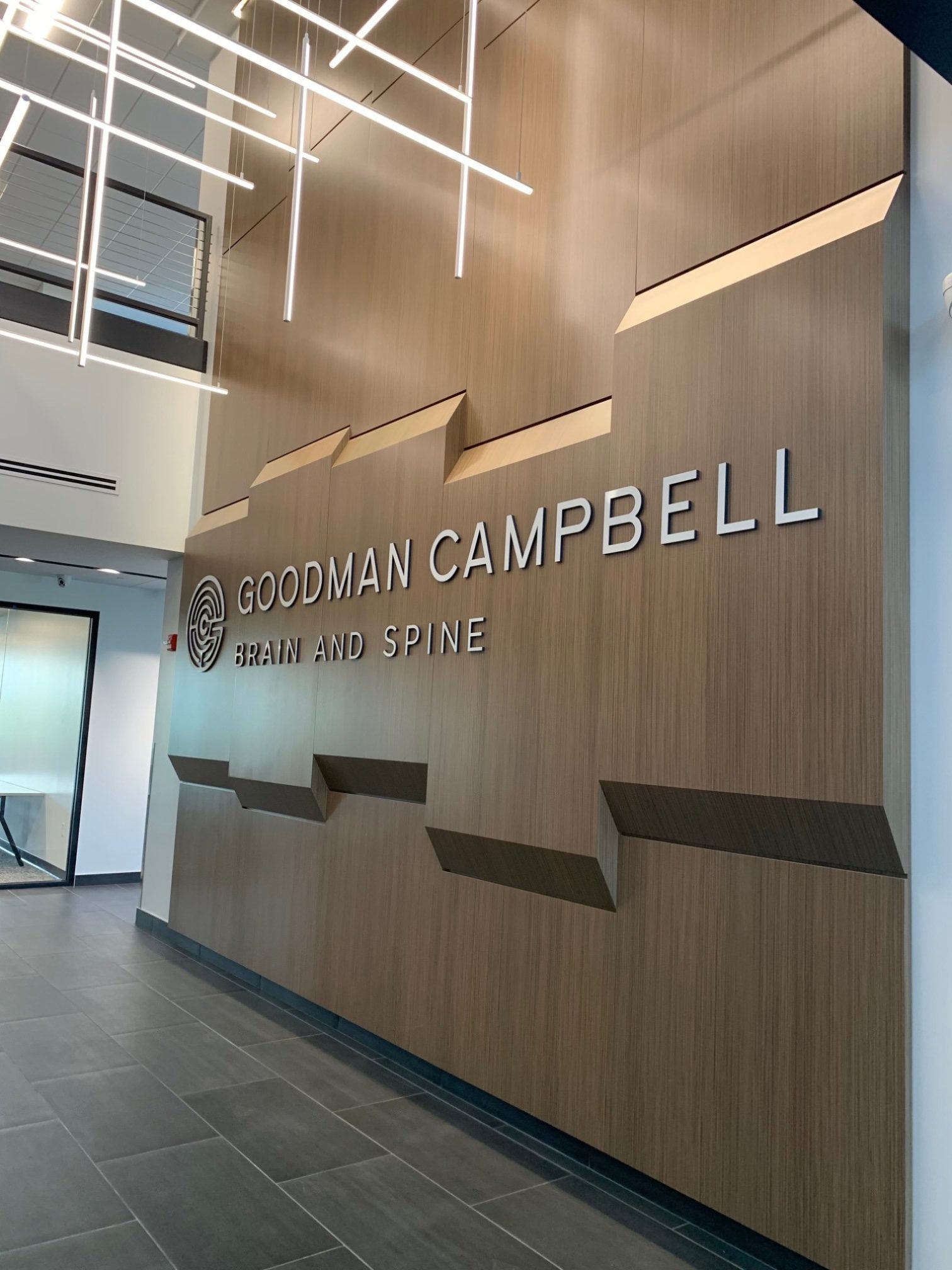 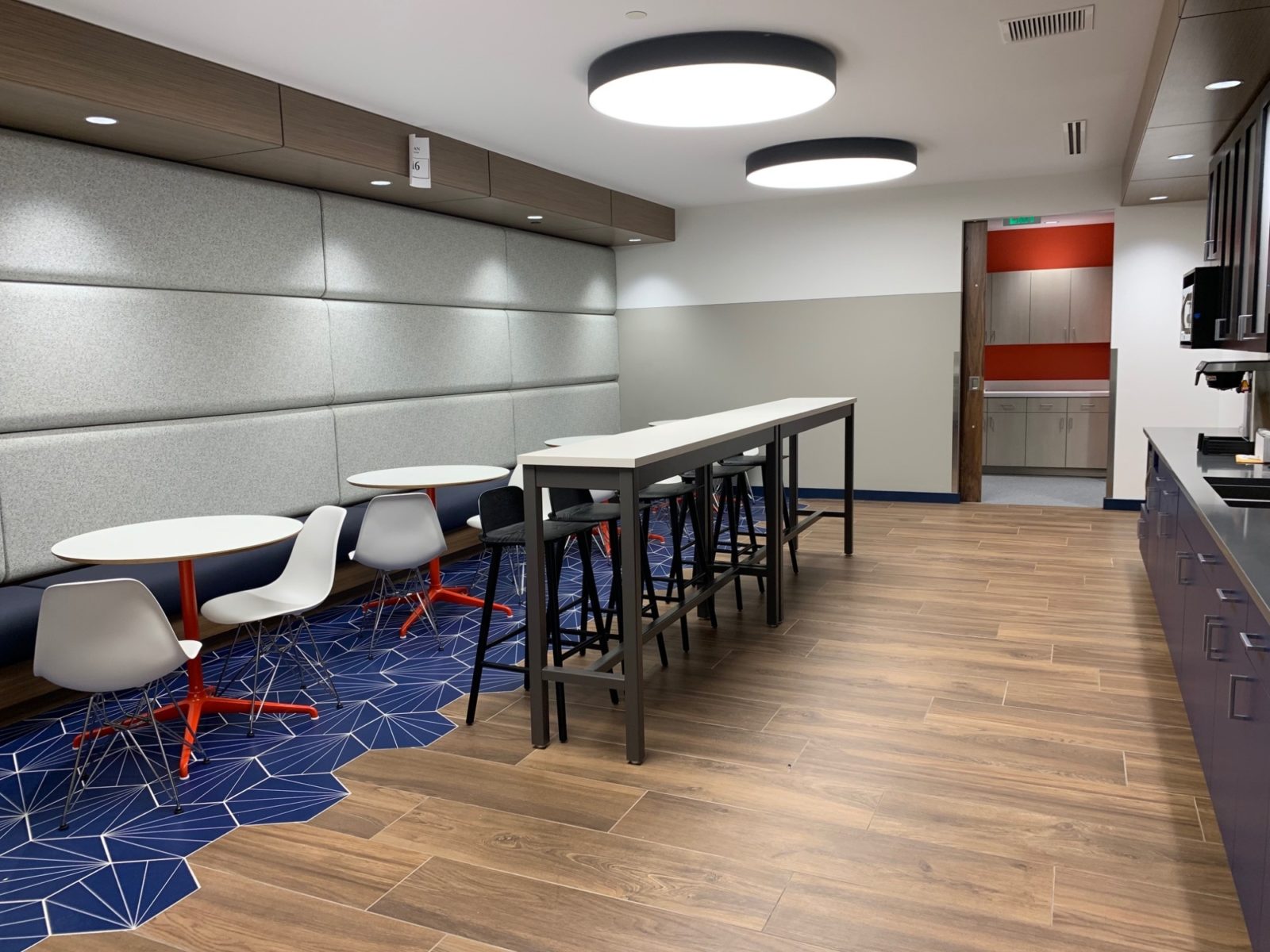 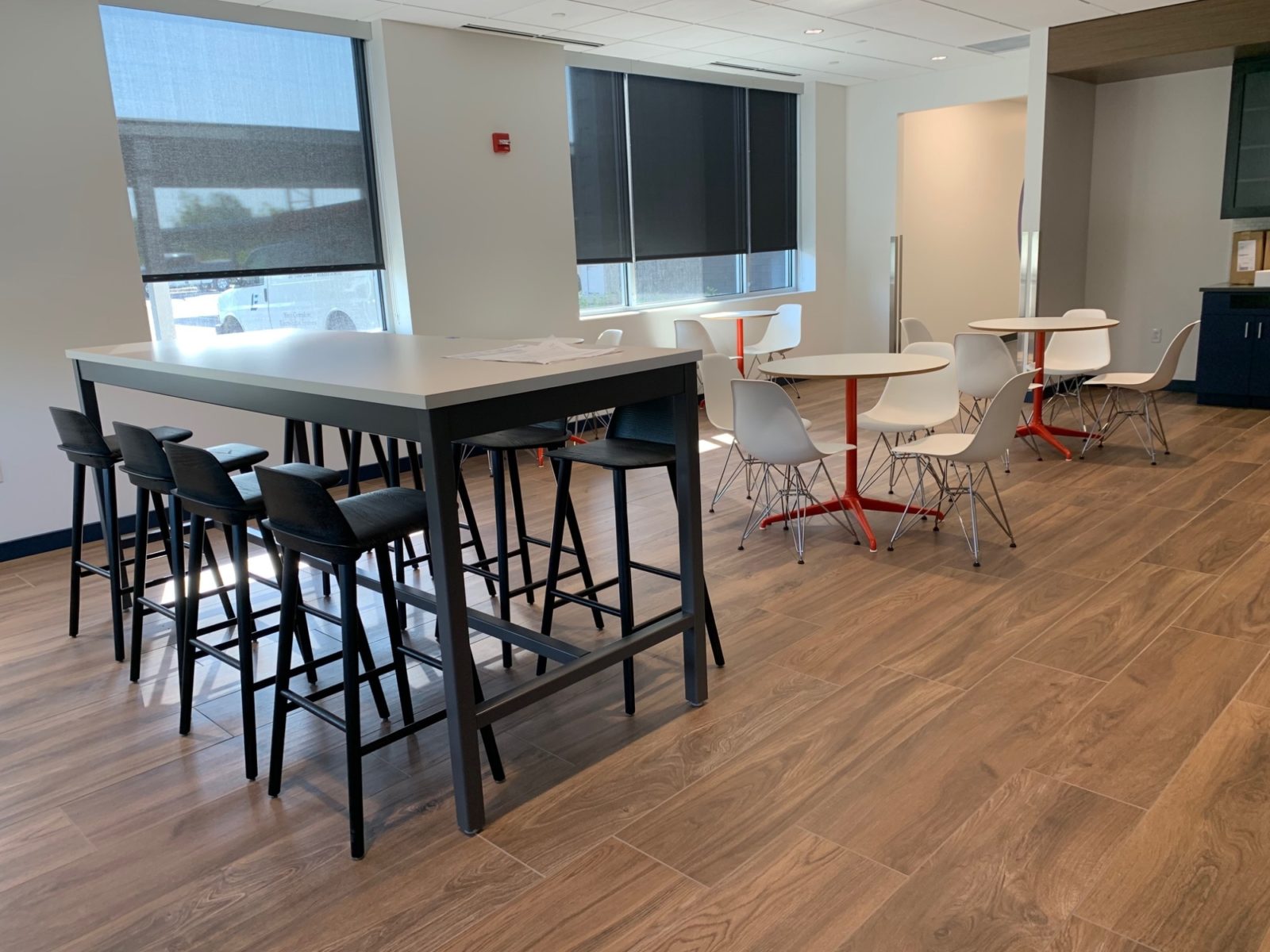 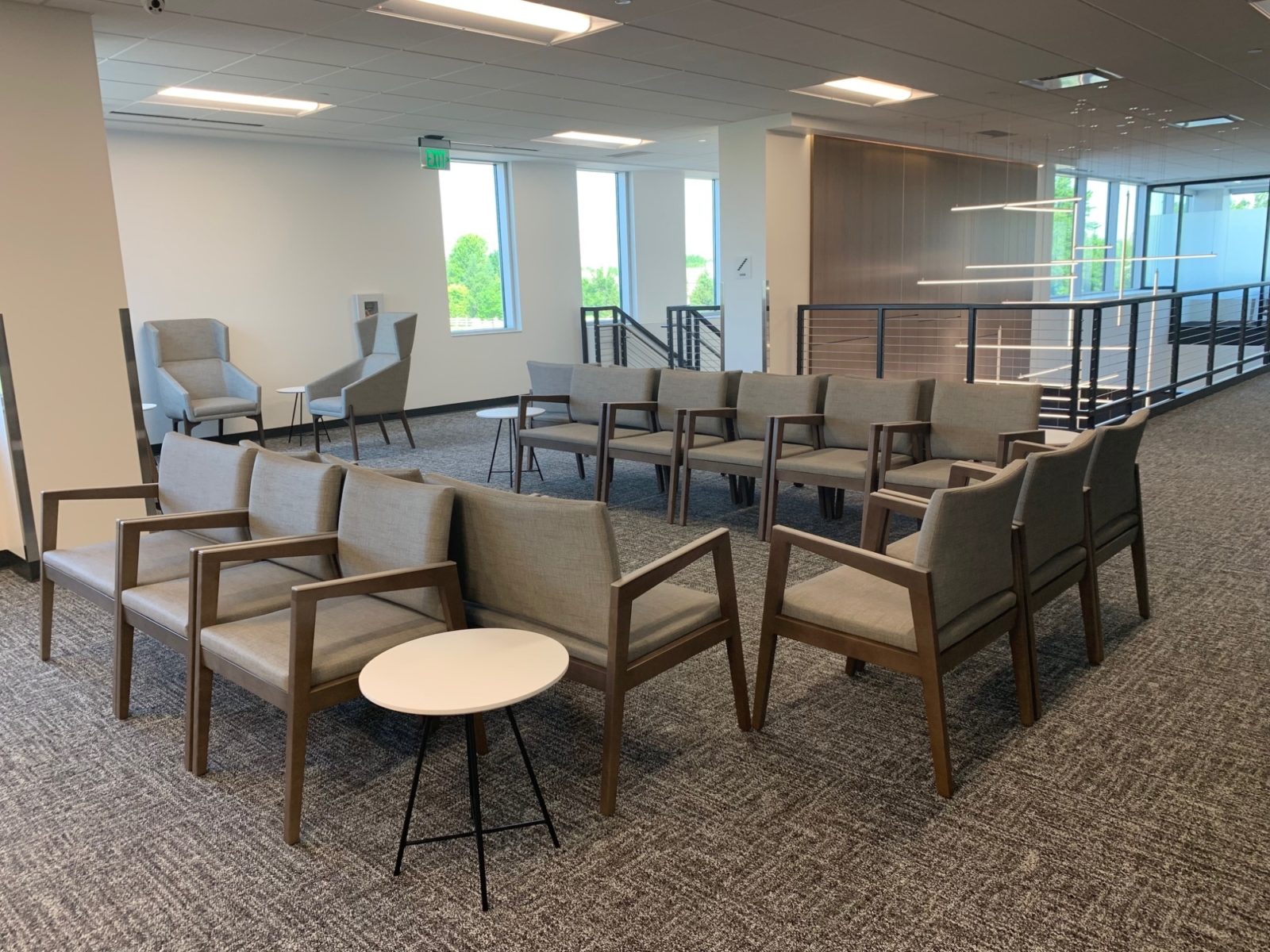 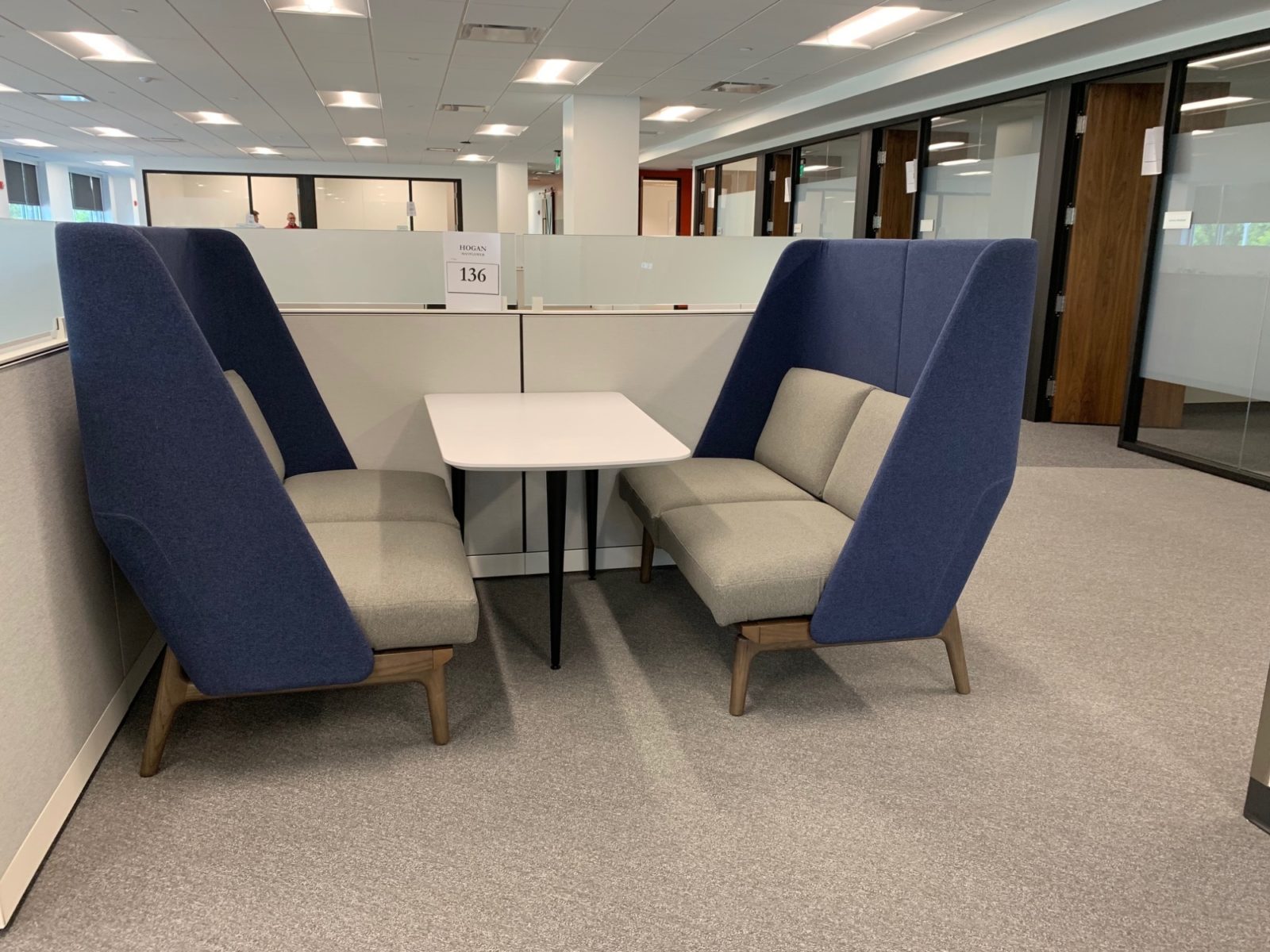 For 15 years, Goodman Campbell had operated out of a space that, according to John Moeller, executive director of operations at Goodman Campbell Brain and Spine—was in dire need of an upgrade. During that timeframe, they had also worked with Officeworks on several other buildouts of their locations around central Indiana.

“I’ve worked with Julie McGinnis and the OfficeWorks team for 15 years for all of our buildouts, so we’ve done many projects together,” John said. “This was our largest and most exciting one because we were building it from the ground up.”

The project had several other “firsts.” This was the first building Goodman Campbell would own. For two of the Goodman Campbell team members engaged in the facility project, it was a new experience. In addition, it was the organization’s first project that would introduce an open floorplan concept.

With their new building, Goodman Campbell sought to create a contemporary, comfortable space for patients and team members.

To help achieve that vision, OfficeWorks collaborated closely with the architect and members of the Goodman Campbell team, presenting options and ideas consistent with the desired look and feel. Renderings and mock-ups helped the team visualize the environment.

“We’ve always been huge fans of Herman Miller—the furniture is just the right intersection of look and functionality,” John said. “The longevity of our partnership with OfficeWorks has made a huge difference. Julie and Megan made the process easy and approachable so the folks who were new to the experience didn’t get overwhelmed by choices. A flexible furniture line combined with collaborative people creates a nice process.”

A timeless environment for healing, teaching, and discovery

With their new Carmel location, Goodman Campbell has created an environment that not only looks great but has had a dramatic effect on teamwork between departments.

“We had trepidation about the open concept, because some team members are on the phone throughout the day and others are ‘heads-down’ folks,” John said. “It has proved to be an opportunity; everyone loves it. OfficeWorks’ design on the workstations promotes natural light in every area, and that was key to this project. Departments get along better and people have broader relationships with coworkers. Instead of just meeting in the break room, they interact all day long.”

John has also observed that longtime team members “have a new skip in their step.”

“Someone who has been with us for several years recently told me how much she appreciates the new office,” he said. “Moments like that make all the difference in the world. It’s been several months since we’ve moved in, and the excitement has sustained, both with patients and team members.”

“Goodman Campbell is a great partner—they’re trusting, open to new ideas, and fun to work with,” Julie said. “We appreciated the opportunity to work with them to create a space that will serve them for years to come.”